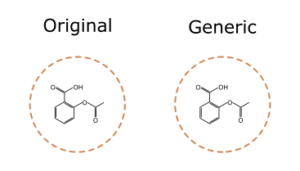 Generics are defined as drugs that are equivalents of the innovative reference drugs containing the same active pharmaceutical ingredient. The term refers to substitutes for synthetic drugs. Generic drugs are allowed for sale after the expiry of the patent of the original drugs.

Generics, for example acetylsalicylic acid (ASA), also known as Aspirin, are small enough to be synthetical manufactured therefore the medical profile of generics is believed to be equivalent in performance (Figure 1). Due to much smaller expenses in research and development, these drugs only cost a fragment compared to the original1.

In order to guarantee efficiacy and patient safety, the approval of a biosimilar is much stricter. Its simpler than registration of a biopharmaceutical however much more difficult than generics approval. This is why, despite the huge potential, only 33 biosimilars have been approved by the EMA (as of Dec. 2017)3. Main reason is the complexity of the product; in comparison to synthetic drug it’s size is thousand-fold and requires a host cell as expression system to be manufactured (table:1). However, technical innovations and gain of knowledge are steadily increasing the approval rate, sixteen of the biosimilars were approved in 2017 alone. 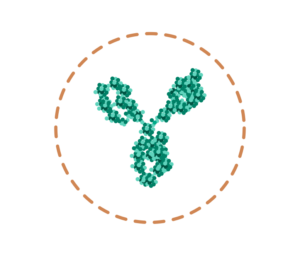 U.S. Food and Drug Administration (FDA) use the term follow‐on biologics instead of biosimilars. A biologic is manufactured in a living system such as a microorganism, or plant or animal cells. Most biologics are very large, complex molecules or mixtures of molecules. Many biologics are produced using recombinant DNA technology. Product mimics from vaccines, blood components, allergenics, somatic cells, gene therapy, tissues, and recombinant therapeutic proteins all are summarized under the term biologicals.

The term “Biobetters” was coined at a conference in Mumbai in 2007 as term for improved biosimilars. Biosimilars, as mentioned above, are generic versions of a recombinant drug that are as exact copies as possible of their role models – for better or for worse! If a direct comparison of the two active substances reveals any specification in which the “copy” of a biologic has other – obviously better – properties than the original, it cannot be approved as a biosimilar. As a biobetter or biosuperior, it must prove its efficacy and safety in a normal approval process.

Modification which come to mind the first are change of the molecular structure of the reference active substance, and change in pharmaceutical form.

This website uses cookies to improve your experience while you navigate through the website. Out of these, the cookies that are categorized as necessary are stored on your browser as they are essential for the working of basic functionalities of the website. We also use third-party cookies that help us analyze and understand how you use this website. These cookies will be stored in your browser only with your consent. You also have the option to opt-out of these cookies. But opting out of some of these cookies may affect your browsing experience.
Necessary Always Enabled
Necessary cookies are absolutely essential for the website to function properly. This category only includes cookies that ensures basic functionalities and security features of the website. These cookies do not store any personal information.
Non-necessary
Any cookies that may not be particularly necessary for the website to function and is used specifically to collect user personal data via analytics, ads, other embedded contents are termed as non-necessary cookies. It is mandatory to procure user consent prior to running these cookies on your website.
SAVE & ACCEPT