The yeast species Pichia pastoris has emerged to one of the most important expression systems in biotechnology. P. pastoris is able to utilize methanol as the only source of energy and carbon; an unique ability which predestines the yeast not only as model organism for methylotrophics but also enhances it’s capabilities as host for protein expression.

In the 1970s P. pastoris first found its way into the lab, cultivated on a commercial scale and sold directly as protein-containing animal feed. The interest in the yeast fungus was mainly aroused by its methylotrophic character, as methanol was very cheap compared to other nutrient media.1

P. pastoris has only become increasingly popular as an expression system over time as a result of progressive research in the field of genetics and the development of recombinant DNA technologies.
Since yeast has been granted GRAS status (generally recognized as safe) by the US Food and Drug Administration (FDA), it has also established itself for the production of active pharmaceutical ingredients.

Cell lines from multicellular organisms like HEK293 or CHO cells usually require complex rich media, including amino acids, vitamins, and growth factors in contrast P. pastoris can grow in media containing only one carbon source and one nitrogen source, further reducing production costs.3 P. pastoris is not sensitive to pH changes, the yeast can be cultivated over a wide pH range without significantly affecting growth4. Disease-causing factors such as pyrogens and lysogenic viruses cannot target yeast in general and therfore contaminate the product.

Pichia can easily be grown in cell suspension in reasonably strong methanol solutions that would kill most other micro-organisms, a system that is cheap to set up and maintain. The utilisation of methanol requires the presence of proteins which can introduce alcohol into the yeast metabolism. In P. pastoris the alcohol oxidases I and II (AoxI, AoxII), are able to oxidize methanol as initial enzymes to hydrogen peroxide and formaldehyde. Alcohol oxidase I in particular has a very low affinity for oxygen. The Yeast compensates for this deficiency by producing large amounts, even up to 30% of the whole cell protein, of AoxI. To make this possible, the AOXI gene is controlled by the very strong AOX promoter, which only leads to the transcription of the corresponding gene in the presence of methanol5,9. If a AOX promoter (usually AOX1) is now utilized for recombinant protein production, the accumulation of biomass can be separated from the actual protein production in a fermentation process, an important step for upscaling and industrial production.

The strong promoter together with separation of production processes raise the protein yields. Additionally, Pichia can grow to high cell densities, and under ideal conditions can multiply to the point where the cell suspension is no longer fluid. For example, non-glycosylated, monomeric proteins, such as human serum albumin (HSA), can be produced in fermentation with yields up to 10 g/L 3.

Optimization of the Expression system of P. pastoris

K. R. Love showed 2012 that protein trafficking through the secretory machinery is often the rate-limiting step in single-cell production, and strategies to enhance the overall capacity of protein secretion within hosts for the production of heterologous proteins may improve productivity.4

One approach is to utilize an expression vector, where the desired protein is produced as a fusion product to the secretion signal of the α-mating factor from S. cerevisiae. This causes the protein to be secreted into the growth medium, which greatly facilitates subsequent protein purification. Some commercially available plasmids have these features incorporated (such as the pPICZα vector).6

In comparison to E. coli, Pichia is capable to equip proteins with disulfide bonds and glycosylations in proteins. However, secret 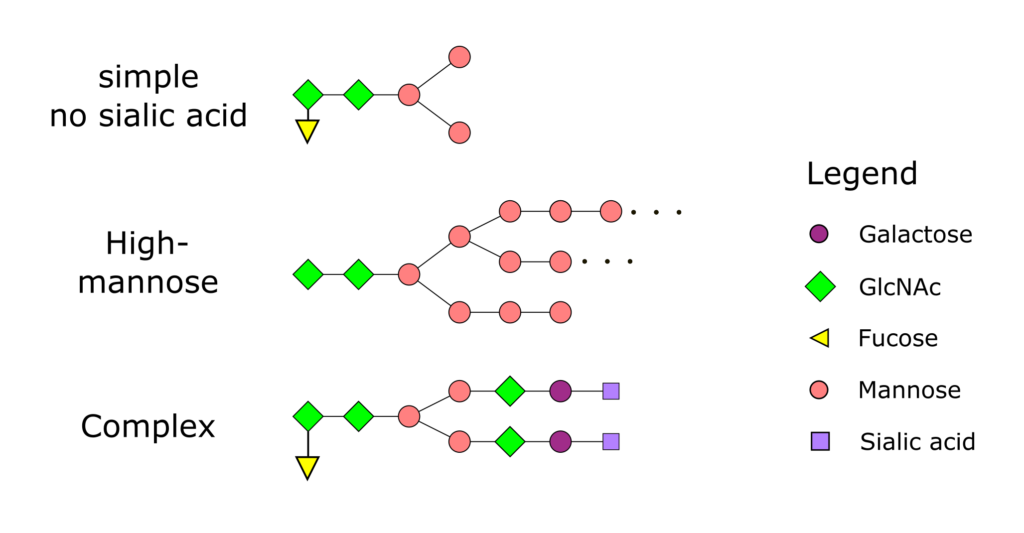 ion of more complex proteins in P. Pastoris, including multimeric structures with post-translational modifications, faces more obstacles, proper folding via chaperones amongst others.4

In particular, the glycosylation mechanism of yeasts is a recurring problem in the expression of human pharmaceutical agents. Usually proteins produced in yeasts are hypermannosylated, hundreds of residues can be added, in P. pastoris between 8 and 14 mannose residues are added. Hypermannosylated proteins are partially non-functional in the human organism, can trigger allergic reactions similar to HCPs and have a very short half-life in human serum, as they are mainly bound by mannose receptors in the liver.7

In 2008, a research group managed to create a strain that produces erythropoietin in its normal glycosylation form.8 This was achieved by exchanging  undesired enzymes of the yeast metabolism, which  are responsible for the fungal type of hypermannosylation, with the mammalian homologs by means of recombinant DNA techniques10,11. Thus, the altered glycosylation pattern allowed the protein to be fully functional. Successful discoveries in this research field not only benefit the yeast expression system  but can be applied to other expression systems like E.coli in the future.

This website uses cookies to improve your experience while you navigate through the website. Out of these, the cookies that are categorized as necessary are stored on your browser as they are essential for the working of basic functionalities of the website. We also use third-party cookies that help us analyze and understand how you use this website. These cookies will be stored in your browser only with your consent. You also have the option to opt-out of these cookies. But opting out of some of these cookies may affect your browsing experience.
Necessary Always Enabled
Necessary cookies are absolutely essential for the website to function properly. This category only includes cookies that ensures basic functionalities and security features of the website. These cookies do not store any personal information.
Non-necessary
Any cookies that may not be particularly necessary for the website to function and is used specifically to collect user personal data via analytics, ads, other embedded contents are termed as non-necessary cookies. It is mandatory to procure user consent prior to running these cookies on your website.
SAVE & ACCEPT